You can change the currency anytime

Thank you for your request!
We’ll be in touch shortly.

1 of 3 - Easy. No much walking, no long driving, take your time and relax

2 of 3 - Moderate. Consider some walking, some days may include long drives

3 of 3 - Challenging. You may have to take some risks and to fit the requirements

This exciting two-week tour will take you across Ghana, Togo and Benin, where you’ll get the chance to witness Ouidah’s incredible voodoo festival. You’ll travel with a small group of likeminded travellers and experienced local guides on an adventure that will please Africa newbies and old hands alike. 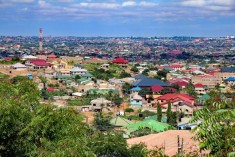 Arrive in Lome and transfer to your hotel. Overnight Hotel Ibis or similar. 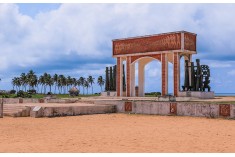 Explore the city including its central markets and the fascinating – if rather gruesome – fetish market, where animal parts are sold for use in traditional medicines. We also meet a traditional healer who can cast more light on the traditional customs found here. Later, we cross into Benin and head to Ouidah for the night. Overnight Hotel Casa del Papa or similar. 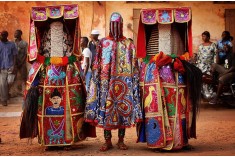 On the 10th January each year Benin holds a national celebration day in honour of its traditional religion and of the cults associated with it. Ouidah in particular is a focus for these ceremonies, and thousands of adepts, traditional chiefs and fetish priests gather here to perform fascinating rites and rituals. This isan amazing opportunity to witness the traditional culture of the region, where devotees assume the identity of gods and spirits and the realm of the magical is close at hand. Time permitting, we will visit the python temple, where snakes are venerated as representations of gods, the old Portuguese fort and finally head to the beach and the sombre ‘Gate of No Return’, the point from which slaves left Africa for the New World. Overnight Hotel Casa del Papa or similar. 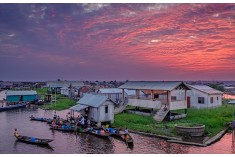 Today we head out onto Lake Nokwe to visit Ganvie, the largest stilt village in Africa situated in the middle of the water. The ‘village’ is home to around 25,000 people, most of whom go about their daily lives without setting foot on dry land. From here we continue to Abomey, once the centre of the powerful kingdom of Dahomey, and home to an impressive Royal Palace. The palace is now a museum displaying various artefacts from that time. Overnight Hotel Jeko or similar. 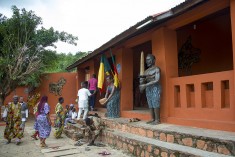 Stop at the Dankoli fetish, the most important voodoo shrine in Benin, where we may be able to witness rituals taking place. From here head north to visit the villages of the Taneka people, a small but very traditional ethnic group, and meet their ‘feticheurs’ (traditional priests). Overnight Hotel Tata Somba or similar. 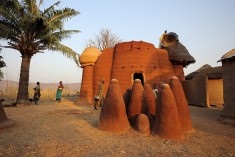 Drive into the lands of the Tamberma, one of the region’s most traditional groups who live in fortified houses known as ‘tatas’ – quite a spectacular sight. We spend time learning about their culture and customs, crossing into Togo and heading to the town of Defale for the night. Overnight Hotel Defale or similar. Spend the morning exploring the villages of the Kabye and Moba people, in the Defale Mountains. We then head to the town of Sokode. This evening we witness a fire dance, where the participants use burning coals in their performance – another fascinating demonstration of local beliefs and customs. Overnight Hotel Central or similar. 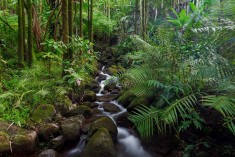 Drive south to the tropical forests, stopping first in Atakpame to see traditional crafts and then continuing to Kpalime. Explore its markets and continue to nearby Kloto, where we take a walk in the forest. Accompanied by a local entomologist we learn about the butterflies and other insects that live here. Overnight Hotel Gess or similar. 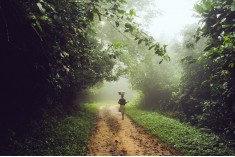 We cross into Ghana and drive to the Volta region. This is a centre for the Krobo people, and we see how they create exquisite beads using traditional methods. Overnight Hotel New Capital View or similar. 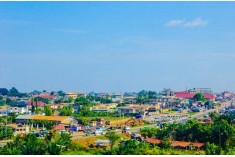 Continue to Kumasi, Ghana’s second city and home of the old Ashanti Kingdom. Explore the city including the Ashanti Cultural Centre, which gives a great insight into what once was one of the most powerful kingdoms in the region. If possible, we will be able to see a traditional Ashanti funeral, quite a spectacle at which visitors are welcome. Overnight Miklin Hotel or similar. 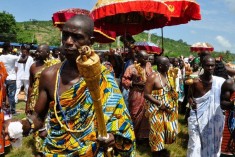 Continue our exploration of Kumasi by visiting the Royal Palace Museum, with its unique collection of golden jewellery. From here we drive to Anomabu on the coast. Overnight Anomabu Beach Resort or similar. We visit the fishing town of Elmina, best known for St George’s Castle, the oldest European building in Africa and once used as holding centre for slaves. In the town itself, we explore the old quarter with its unique Posuban shrines, made by the traditional ‘asafo’ societies which were once responsible for local defence. From here we drive back to Accra. Overnight Hotel Villa Boutique or similar. 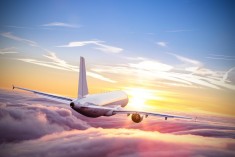 Spend the morning exploring Accra, visiting the National Museum and the old quarter of Jamestown, as well as the quarter where craftsmen design flamboyant coffins for the deceased – a uniquely Ghanaian experience. Later transfer to the airport for your flight home.

12 nights at the hotels

Guided tours as per itinerary (only local guides)

Transfers as per itinerary 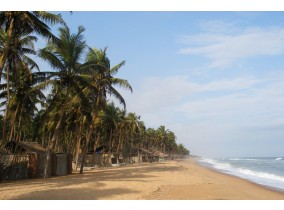 Take a tour to Abomey, once the centre of the kingdom of Abomey Witness a fire dance in Atakpame and Kpalime Learn about Tamberma, one of the region’s most traditional groups

I recently toured Qatar during the World Cup with Varya and Mike’s team at World of Discoveries. The experience over three weeks was first class. Varya and her team nailed the detail for every aspect of the trip from planning and booking through to the actual travel, tours, sightseeing, transport, accommodation and ticketing to games. They were always accessible to deal with any issues that arose and went the extra mile to ensure the travelling group was happy, organised and safe. And they throw a mean party. I wouldn’t hesitate to recommend World of Discoveries for trips of a lifetime.

We came across WOFDI last spring when we were trying to figure out how to attend the World Cup. The staff at WOFDI organized game tickets and accommodation for us. Communication was excellent throughout. They provided airport transfer and cultural tours as well. Wonderful experience!

World of discoveries went above and beyond on the World Cup tour, aside from the tour in Qatar they helped us and manage the logistics to get small 2-3 day tours to Egypt and Jordan in a marathon but memorable 16 days trip. We got to be in 2 of the 5 wonders of the world (Egyptian Pyramids & Petra; among other places) Everything they promised they delivered and always check on each and everyone on our group of 7. Helen from Spain did all the paper work and signed us up and the the land crew that greeted us in Doha were just perfect! Very well recommended and for the next World Cup and the Olympics they will be our go to people for the planning for a great experience such as Qatar 2022. Well done Wofdi!! Kudos to everyone of you!!! (Helen, Michael, Anna, Lina, Varya, among others) don’t meant to leave anyone out intentionally!!

The World of Discoveries team made organising a complex holiday to the Qatar World Cup a breeze. My initial contact, Michael, managed to bring the cost of the holiday in line with my budget where other travel agents told me or would be impossible. On the ground we had a great experience on the desert tour and generally had a ball. Thank you

Best Staff, Great Communication The communication and assistance from the Michael from the beginning, Alex during the pre-tour and post tour and Anna during the tour was better than exceptional; we were well taken care of. The staff truly cared about us having a memorable experience and their efforts greatly contributed to that happening. I’ll definitely be looking into their other tours.